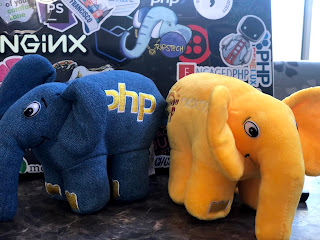 It's been a bit of a whirlwind year so far and it's only February!! I feel like just yesterday I was in Belgium for PHPBenelux (oh wait, it pretty much was ... will have to post on that later).

If you are here because you're looking for the slides from either the tutorial session or the general session from SunshinePHP, you can find them here:


If you had a question that you did not ask, please drop me a note and I'll be happy to answer whatever I can!

If you were there and have not already done so, please leave feedback via Joind.in. Your feedback is critical to ensuring that the talks are always improving so that everyone can take away the best experience possible.

There is so much churning in my head from this last weekend, but the theme of Quality really sank in. So many great presentations on testing, refactoring and leveraging middleware (just to name a few).

My personal hot topics to come home and work with were actually from the talks focused on data storage and retrival: Effective Redis for PHP Developers and Location Based Searching with Elasticsearch.

We've been using Redis for a while for session storage and data caching, but have not even begun to leverage what it is capable of. I have a much better understanding of the underlying data types now thanks to @elazar. I may not have gotten all the details, but I can't wait to dig back into Redis now.

Elasticsearch on the other hand has always been something that I've been interested in, but thought it was out of reach, being a "pricy enterprise solution". @DerekB_WI did a great job of showing how straight forward querying Elasticsearch via RESTful API can be and what the capabilities of it are - a much more straight forward example than any other Elasticsearch session I've been to (and I've been to quite a few). However, what really blew my mind was when he casually tossed out that he was running it himself via Docker. Oh, Kibana too. What?? Yes, you too can play with Elasticsearch. I'm going to put together an entire blog post on this shortly, including the docker-compose.yml file you need to launch your own Elasticsearch stack with Kibana via swarm (because yes, you can - don't believe the blog posts saying it won't work in swarm). So, HUGE props to Derek, because we're about to kick our reporting up to the next level and without this session we wouldn't have known it was possible.

And if you're one of those folks reading this and saying, what, Swarm?? Yes, Docker Swarm - no, not Kubernetes. Use the orchestration tool that is right sized for you and your company. If you actually need the complexity that Kubernetes introduces, go for it - more power to you. I prefer to avoid that if possible. If you've been using docker-compose up/down, you're ready for the jump to Swarm.

If you haven't been to a conference recently (or ever) please take this heartfelt sentiment as sage advice -- Go. Find a "local" conference and go (was talking with a gentleman on the bus to the airport last night that was at SunshinePHP because when asked if there was a conference local to him in Toronto and the answer was no, he said this was the one he needed to be at, so this is where the company sent him - kudos to you sir!!!) Don't have time to devote to a full conference? Find a local user group! When we share information with one another, we help bring the entire ecosystem up. If you're not sure where to go to find out if there is a nearby conference or user group, try the Joind.in events page as a starter.