In my last post, I mentioned that I was looking forward to making a Swivel extension for Yii. I'm excited to share that I've FINALLY found the time to do so. 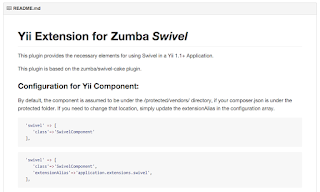 It's a fairly straight forward extension, simply providing access from the application to a Swivel component which interacts with the core Swivel library, and which handles the general bucket assignment for users as swivel is accessed. I've also provided a class for integrating the existing Swivel logger over to the primary Yii Logger, and provided a data structure and model for storing the list of features for the application.

The extension is available on the Yii Framework Extensions list, from the GitHub repository or as a composer package.

It's really designed to be installed via composer:
I've tried to keep it lean, but provide a good bit of information about how to implement it and how the Swivel features work on the Yii-Swivel Wiki on GitHub.

I will be creating a 2.0 version shortly as well.

Enjoy! I hope others find it as useful as I think I am going to, and huge props to the Zumba team that developed it and to Stephen Young and his presentation at SunshinePHP 2016!
Posted by Dana Luther at 6:58 PM No comments: 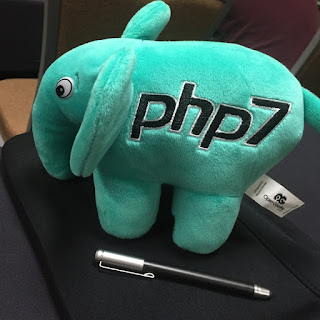 I had the opportunity this weekend to attend the SunshinePHP conference in Miami. What an amazing group of people who are passionate about what they do. The theme for the weekend centered on collaboration and supporting the open source community, something that is near and dear to the heart of many Yii developers. It was a wonderful thing to meet so many people from around the world who believe in supporting community. A special shout out to Josh Holmes and Michelangelo van Dam who were extremely outgoing, encouraging, and full of tidbits of wisdom which they were willing to share.

I wanted to take a few minutes and share some of my hot takeaways from the weekend.

There’s so much more, I could go on for hours about Graph Databases and RUM, Performance Monitoring and PHP Pipelines, just to name a few. If it’s been awhile since you’ve been to a conference, I highly recommend that you go. Find a conference or a user group nearby, or take a leap of faith and visit one that changes not just your routine, but your whole perspective ;)
Posted by Dana Luther at 12:51 PM No comments: